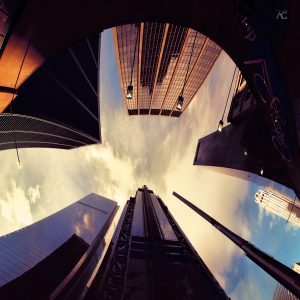 Vistas of AlexAG represent the instrumentally new approach to space, perspective, point of view and your role as the observer in photography and visual art at large, which became possible with emergence of digital age in photographic art. The artificially created imagery gives new freedom of expression and interpretation of the artwork. This new approach enables the artist to extend the visual devices of photography well beyond mere realism.

While all images presented are originally photographs and ultimately create the realistic depiction of reality, the alteration that occurs after the photo is taken adds a new perspective to familiar objects. All panoramas featured provide the opportunity to view a scene pictured from completely new point of view, altering the distances between objects, their relative position and as a result their relationship between each-other, and with an observer.